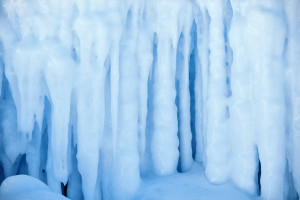 It was a normal Friday night. The Edge youth group was over, and I was locking up the downstairs of the church after one of our depth groups had met there (a windows-open, physically-distant, masks-required depth group with 2-4 students). I went over to make sure the orange closet door was locked, and that was when I noticed that the freezer door seemed to have been left open. Ugh. I figured before I left for the night, I should first throw out any food that was inside.  So, I went to open the door, but it didn’t budge. And yes, that was odd, thanks for noticing.  If at first, you can’t open the door, try, try again. So, I did. Again and again, I pulled and I pulled, but nothing. In a huff, I went looking for a solution and came back with a sturdy pole which, when rightly applied, gave me some added leverage and bam! The door popped open! You may ask why the door was so stuck. Thank you for asking.  I had thought some fool had left the door ajar, but I was wrong. Instead, since no one has been using it for close to half a year now, the freezer decided to double up on its frost production. As a result, the whole inside of the freezer was one big ice/frost/berg (I think in a previous life it sank the Titanic). It was so big, in fact, that it had reached out and assimilated everything on the top shelf of the door, including the metal bar. As a result, when I pried open the door, the whole top shelf divorced the door and stayed in the freezer. In fact, the bottoms of all the plastic containers that were once stored properly in the door were now mooning me.  And yes, that was very rude of them. Thank you for saying so.  At first, I wasn’t sure what to do. Had it been a newer freezer, it would have been self-defrosting, but we were well past defrosting. What we needed now was a self-emptying freezer. Hit a button and, automatically, it would dump all of its ice and frost on the floor like a giant ice-maker. Now, had that happened, we could have been hosting skating parties downstairs at the community center all week, because there was a ton of ice! But we didn’t have a self-emptying freezer, and so we had to do things the old-fashioned way. I unplugged the freezer, went home for a few hours, and then Jo and I returned late that night with malice aforethought and tools in hand. And for the next two plus hours, we chipped and banged and hit and picked away at the ice monster in the freezer. I can’t tell you how many giant tubs of ice we carted outside or how many times we filled the sinks with chunks of frost; but finally, the task was completed. We closed the door, plugged the freezer back in and then jammed a chair against the handle so that the door would definitely stay closed. And as we left, we promised ourselves that we would check on it again in a year. Maybe by then, someone will have invented the self-emptying freezer.

Self-emptying? That may not be a great idea for a freezer, but it is at the heart of Christmas. Paul explains why in Philippians 2:5-8. There, he writes:

“In your relationships with one another, have the same mindset as Christ Jesus:

Who, being in very nature God,
did not consider equality with God something to be used
to his own advantage;
rather, he made himself nothing
by taking the very nature of a servant,
being made in human likeness.
And being found in appearance as a man,
he humbled himself
by becoming obedient to death—
even death on a cross!”

Two notes about this passage before I say anything more. First of all, this is a notoriously difficult text to interpret. Just as a reference point, Gordon Fee, a master Pauline scholar, in his commentary on Philippians requires 16 pages to discuss these three verses (6-8), while Gerald Hawthorne’s commentary only requires 10 pages, but they are incredibly dense. There is no doubt, we are in deep ice here. Second, what makes this even more difficult is that this passage is an ancient Christian hymn that Paul incorporates into his letter and not something he composed as he wrote (you can see that because the passage is indented as is all poetry in the Bible). Now we can move on. Besides if I get any more technical in a blog, I am going to leave you feeling cold.

The key to this whole passage is verse 7 where Paul declares that the pre-existent Jesus “made himself nothing.” We could paraphrase that verse by saying, “Jesus self-emptied himself.” While being truly and fully God (“God of God, Light of Light, Very God of Very God”), Jesus chose not to use his divine right to serve himself; instead, he emptied himself and became human.  But it was even more chilling than that because he chose to take on the nature of a slave. This is the true meaning of Christmas: The pre-existent Jesus was truly God with everything that implies, but he voluntarily gave up everything that was rightfully his and became a slave with everything that implies by becoming human. Now that is upside-down! We tend to think that a creature like God gets to do and to take whatever he wants. It’s “Have it your way” every day, twenty-four hours a day. But Jesus refused to see his divine nature as a means to get and to gain; he refused to see it as a means to selfishness; but rather, he saw it as a means to give. And so, he voluntarily emptied himself. But what does that mean exactly? Thanks for asking!

When Jesus emptied himself, what did he give up? Some scholars think Jesus emptied himself of his divine glory. Others argue he gave up his independent exercise of authority. Still others believe he yielded all the prerogatives of his deity, and still others believe it entailed the forgoing of his omni-attributes (omniscience, omnipotence, omnipresence). Charles Wesley even sneaks this debate into his great hymn, “And Can it Be?” where he writes,

“He left His Father’s throne above, so free, so infinite His grace; Emptied Himself of all but love, and bled for Adam’s helpless race. . . .”

(Yes, that is such a great hymn! Thanks for saying that!). But while scholars want to figure out what Jesus emptied himself of, perhaps it would be better to stick only with what the passage says. It defines Jesus’ self-emptying with three phrases. Jesus emptied himself by taking on the form of a slave, by being made in human likeness, and by being found in human form. Gerald Hawthorne, in his ten pages on these verses, says:

“The Philippian text does not say that Christ gave up anything. Rather it says that he added to himself that which he did not have before: ‘the form of a servant,’ ‘the likeness of a man.’ The implication is that, at the incarnation, Christ became more than God, if this is conceivable, not less than God.”

We can say it this way: Jesus graciously poured himself out for our sakes so that, through his poverty, we might become rich. He emptied himself by taking on our humanity and not in its most glorious form as a king or as a billionaire, but as a slave, a person without any rights or advantages or privileges whatsoever. He emptied himself by fully identifying with our humanity from the very beginning. And he emptied himself by being found in human form. He was fully God, but he was fully human.  He didn’t just look like one of us. He was one of us.  And he did all of this so that he could serve us and give his life as a ransom for many (Mark 10:45). Jesus became the God-man and humbled himself and refused to strive for honor and rights and status and power; but instead, his whole life was characterized by self-surrender, self-sacrifice, self-giving and self-denial. He emptied himself and became obedient even to death, even to death on a cross.

God’s kingdom has always been an upside-down kingdom (at least, from our perspective). That’s because its king voluntarily emptied himself and became poor so that we could become rich (the cold fact is, that is just upside down!). So, let’s follow him and be upside-down. See, we tend to focus so much on what we are going to give for Christmas, but maybe this year we should spend more time thinking about what we can become. In verse 5 we read: “In your relationships with one another, have the same mindset as Christ Jesus.” If we were willing to do that, maybe for Christmas we could add to our character a growing desire for self-surrender, self-sacrifice, self-giving and self-denial. Maybe we would be willing to empty ourselves and follow Jesus who delighted in emptying himself for us.

As I said, it is an upside-down kingdom; but Christmas is an upside-down season. And if we approach it right, all the blessings of the season come to us. But if we refuse it, all we can expect is for our hearts to grow colder and colder until they become a giant freezer of ice. But it is Christmas, the season of grace. Maybe this year, someone will come with hammers and picks to free us all from our freezer prisons. Maybe this year, we will all be about the grace of self-emptying.